Vincent risked everything for his son.

When I first met him, he described himself as a peasant farmer, but it was obvious that he was much more than that. Most farmers in East Africa never travel more than a few miles from their homes. But Vincent picked up his whole family and moved across the border from Kenya to Uganda, learning a new language in the process.

Most village farmers grow the same basic food crops year after year. But when I visited Vincent’s two-acre homestead in the village, he explained his rotation plan and showed me plots where he had introduced new cash crops. Vincent worked hard, supplementing his farm income with a job as a night-time security officer for the University.

He was especially proud of his sons. In Uganda, many families invest heavily in the firstborn, in hopes that their success will eventually lift the fortunes of everyone else. Vincent put everything he had into educating his son, Anthony. He sold property, committed all his income, and borrowed money to send Anthony to LivingStone International University as a member of the pioneer class of students.

Anthony demonstrated an aptitude for leadership early on and was elected as the first Student Guild President. He graduated with a degree in Business with the respect of the faculty and his peers, got married, and had two children. Two years later, Anthony developed an inoperable tumor in his throat and died that November.

When I heard the news, I grieved for Anthony’s family. The whole community lost a bright star of leadership and potential. And I grieved for Vincent, who invested everything in his son, all his hopes for the future, and experienced devastating loss.

I ask you to judge, reader: should Vincent have played a safer hand? Should he have held back and not done all that he could to create opportunities for his son, his family, and his grandchildren? Should he not have taken the risk?

I could not give such counsel of safety. My life, and the lives of hundreds of others, are richer because Anthony came to LIU. I will never forget the day Anthony stood up in the student assembly and modeled the difficult leadership challenge of humbly taking ownership of his mistakes and accepting the consequences. In the process, he inspired all of us to expect more from ourselves and our leaders. When I look at national leaders in both America and Africa, I see a shocking inability to do what Anthony boldly demonstrated. Anthony took a risk to lead differently, and he made a profound impact.

Mastering the emotion of fear

It may be difficult for you to identify with Vincent’s story. We have many more safety nets than he does, more than we normally think of. But I challenge you to ponder his choices and think about how much your community (your employees and your family) needs you to embrace risk and invest all that you can.

To prompt your thoughts, I offer three practical questions to help you step out to embrace risk. Answering these three questions may help you to gain mastery over the emotion of fear and make a decision that creates new opportunity for yourself and those you lead.

Question 1: What is the cost of doing nothing?

Leaders dither over risk-laden decisions because we fear the cost of failure. Our thinking is dominated by what we might lose if we tried. But the question we neglect to ask is: What is the cost of doing nothing?

The cost of inaction (or of moving too slowly) includes financial loss, but it often extends to damaged morale, confusion about company direction, higher turnover, client attrition, and growth plateaus. When leaders add up those costs, they gain perspective on the “risky” decision and set their former fears in a more rational context.

Question 2: What becomes possible if you make a move?

The next question requires you to visualize a realistic future in which you took the risk and gained the expected return. What becomes possible if you make a move?

One company owner I coached had delayed promoting a rising star because of what might happen if they disagreed on major decisions. But when he considered what he would gain from having a highly-motivated lieutenant, he embraced the risk and opened huge new possibilities. His reward has been lower stress, getting himself out of the “weeds” of his business, developing new business in time that was freed up, and getting his company back on a growth track.

Question 3: Where would you get the resources if you had to have them?

Vincent did not have the money to send Anthony to LIU. Even at highly subsidized rates, a single year’s tuition is 3-5 times the annual income of a Ugandan farmer. But he leveraged every resource and every relationship to make it happen. Which brings us to the third question for overcoming your internal resistance to risk: Where would you get the resources if you had to have them?

Once you are convinced that the cost of the status quo is too high to sustain and the reasonably expected gains are too great to ignore, then ask yourself how you could scrape together what is needed and start moving forward. This question opens your eyes to resources you may have forgotten about or not thought of earlier when your mind was focused on potential losses.

In my own experience, I have answered this question by emptying bank accounts, leveraging short- and long-term credit, refinancing a house, tapping my retirement account, asking a friend for help, and selling property to make deals work. Every significant achievement of my life has been preceded by risk that felt overwhelming at the time. And every time I have found that I had more resources and more resilience than I thought I had.

To overcome the decision-paralysis that often accompanies risk, ask yourself the three questions and write out your answers and share them with a trusted confidante.

In our company, Embracing Risk has become one of our three core values (expecting results and pursuing relationships are the others). We don’t believe leadership success is possible without it. To us,

Embracing Risk means we lean in to problems rather than avoiding them, we act with courage in the face of threats, and we believe that the impossible can happen. Risk is not foolish gambling; instead, it is taking considered and courageous action in spite of the possibility of failure.

Follow us on LinkedIn to get thoughtful articles on the bridges leaders must build and cross to inspire greater performance. 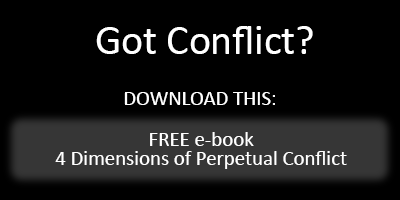