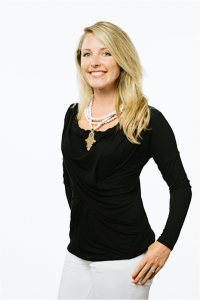 Neiman Marcus shoppers look for high-end jewelry that defies the conventions of the usual department store fare. That’s why the Akola Project caught the eyes of the luxury store chain’s buyers: Akola’s products are made by women in urban poverty, trained in this skilled craft by Akola and paid a living wage for their time.

“These are women who have slipped through the cracks and who need flexible work opportunities,” said Akola founder Brittany Merrill Underwood. She started the project with women in Uganda, and now she has extended Akola’s work into Dallas, where she offers work to more than 100 women and teaches them the skills they need to make high fashion jewelry.

As she began the process of expanding the work to Dallas, Underwood connected with Executives in Action, an organization that unites social enterprises with the leadership they need to succeed. Here she met Phillip Shero, and they had an immediate link through their mutual experience in Uganda.

“Phillip came on as the team leader for our nine-member executive team,” said Underwood. “He’s been fantastic. He oversaw our entire strategic planning initiative.”

Shero could speak to the cultural nuances and developmental issues Akola had encountered in Uganda. “He knew how to address the strategic issues,” said Underwood. “The executive team realized that they needed a team leader, and it was very evident that he had the leadership qualities and the communications skills to do that.”

Shero’s non-profit experience became a great asset, she continued. “We have a retail side and serve a Spanish population, and Phillip’s work cross-culturally made him able to work with anyone in any context,” she said. “He gained that experience from working in a developing country, and that’s really valuable.”

The Dallas expansion went forward as scheduled, and Underwood made the connection to Neiman Marcus and formed a partnership there. “We’re in every store nationwide and in their catalog,” she said. “We’re the first full-impact brand in the luxury space.”